My Dog: The Interview

Me: Gus, why are you neurotic?
Gus: (staring intently into my eyes) Bark!

Me: But I took you to the park? Remember? Snow? Birds?
Gus: (tilting his head from side to side as if listening to music in the distance) urwr?

Me: Why don't you lay down and stop pacing the living room?
Gus: (appears not to understand the question)

Gus: Bark! bark! Bark!
Me: But I already fed you and took you outside.

Me: Gus, what is it you want?
Gus: (responds by backing into the space between my knee and the couch)

Me: Gus, could you kindly relax?
Gus: (takes the opportunity to leave the room)

I have learned much from Gus, the German Shorthaired Pointer, but not the answer to any of my very practical questions. Except, the question What do you like? the answer to which is Everything that fits in my mouth.
Posted by Dr Write at 2/21/2013 3 comments:

So, as many of you know from the FB-verse, I have been sick for some, if not all, of 2013. Much of this illness covers that last week or so, and some of it covers whole swathes of January, but never mind. I am not here to praise sickness, but to bury it under a list of things I have done, so that I can feel that, indeed, Sickness, you have not buried me under a mountain of used Kleenex and cough drop wrappers. No, I will rise again!! (sniffle, sniffle, cough!)

Results of my Whole36

Well, the Paleo Challenge is over. For those of you who don't know what that is, you can read all about it over at Whole9. Basically, it was to eat only REAL foods for 30 days. Real meaning not processed. So I lived on meat, veggies, fruit, and some nuts. I also gave up caffeine!
What, you may ask, happened in these 30 days? First, let me just tell you, that it was actually 36 days!! I started on January 1, but the folks at my gym didn't start until January 7, so I kept on with them until they were done.
First, a photo collage. 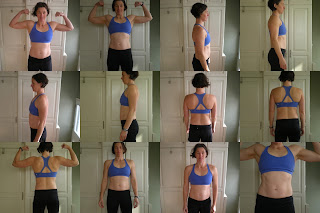 My friend and fellow writer, Mystery Girl, tagged me to take part in The Next Big Thing Blog Hop. So, without further ado, here are my answers to the questions posed.


1. What is your working title of your book (or story)?
I first called it Mole People, because it's about people living underground, but my Son was very sad that it wasn't actually about talking moles. I still call it Mole People, but that's only a working title. I imagine the real title will have the word "dark" in it.
2. Where did the idea come from for the book?
I was teaching a novel writing class at SLCC and I made all the students pitch their books on the last night. There were so many dystopia books that students took to saying (in a fake, movie trailer voice) "In a post-apocalyptic world...." before giving their pitch. The phrase took hold and I wanted to write something. I'm not sure where the whole idea came from. I probably stole it.

3. What genre does your book fall under?
Definitely young adult dystopia.
4. Which actors would you choose to play your characters in a movie rendition?
Ack! I'm sure by the time I finish the book all of the people I choose will be too old. But, that said, Chloe Moretz would make a great Sarah (main character). I could see Logan Lerman as Jonas (male lead).
5. What is the one-sentence synopsis of your book?
The Dark Something (ha!) follows storyteller Sarah as the secluded religious community she has grown up in searches for the Final Prophet who will lead them into the light.
6. Will your book be self-published or represented by an agency?
I will probably look for an agent.
7. How long did it take you to write the first draft of your manuscript?
Off and on (mostly off) for four years. Seriously for the last year.
8. What other books would you compare this story to within your genre?
It is most influenced by the novel Oyster, which is not a YA book at all. I don't know of any religious community dystopias but I am sure they are out there.
9. Who or what inspired you to write this book?
Students mostly. I also wanted to write something that would be more straightforward (chronological) than the other novels I've tried to write, so I set out to write a book with a more traditional trajectory.
10. What else about your book might pique the reader's interest?
The book switches between the perspectives of Sarah, the storyteller, and Jonas, a boy she meets in her journey. It also quotes extensively from the (made up) book of their origins, The Book of Earth.

So now I'm supposed to tag  people to participate next week, so I tag Hightouchmegastore (I can't wait to see who she would cast to star in her poems!), Ann Cannon, Nikwalk, and The World's Strongest Librarian. I can't wait to see what they are all working on!
Posted by Dr Write at 2/04/2013 3 comments: